How to run MyWellnessCheck at your Organization

Wellbeing as a goal of the System

Complex systems that have a goal have some 'success metric' to improve overallsystem quality. For example, a country striving for welfare might keep track of its Gross Domestic Product (GDP) to see whether policy contributes to their goals, at heme park counts the number of visitors every time they introduce a new attractionto see whether they're moving in the right direction, and lastly, universities measure student performance in various ways to assess overall system quality. We believe that every sociotechnical system will benefit from the integration of wellbeing as one of its success metrics. The reasons being that 1) it's the morally right thing to do(Harris, 2011), and 2) improving wellbeing leads to co-benefits (such as high gradesand social behavior, in other words, overall system improvement) (Maccagnan et al.2019). This white paper discusses the case of integrating wellbeing of staff and students in a large university during the 2020-2021 corona crisis. It will outline amethod of systematic and iterative integration of wellbeing to establish a wellbeingfeedback loop and how to establish one at your organization or service.

Assessing wellbeing is hardly a new thing. The literature regarding the assessment ofwellbeing is ample. However, doing this systematically and iteratively leads to two advantages. Firstly, it allows an organization or institution to track wellbeing over time. This isuseful to identify the impact of unintended and intended changes in the system. For example, a university might have to undergo renovations, by assessing wellbeing systematically they can keep track of the impact this event had on student wellbeing(and perhaps adjust exam outcomes accordingly). Secondly, it allows for actionable results by identifying “what should be asked”, which in turn also sensitizes the system to the effects of new vulnerabilities (such as the effects of the corona crisis).The section below will expand on the latter reason.

As briefly discussed, wellbeing is a vast and difficult to grasp concept. Successful attempts have been made to develop measures that assess wellbeing at a global level such as the Satisfaction With Life Scale (Diener et al. 1985). Further, research has been conducted to develop scales that can assess wellbeing at adomain-specific level (e.g. Wellbeing at Work Scale, Demo and Paschoal 2016) Regardless of their success at assessing the psycho-metrics wellbeing, on their own, these metrics are not extremely successful in informing system action (e.g.what action should we take when we know that students students at a university score an average of 6 on the SWLS?) Adding to this is the fact that wellbeing subject to great individual differences that can oftentimes be a result of their context. The image below illustrates how theoretical factors manifest" in a givencontext resulting in measurable indicators of wellbeing that can be subject to change. In other words, by combining global or domain-specific measures with context-sensitive measures of wellbeing, one can inform system action. On the nextpages we'll present the steps of an iteration and how doing this systematically results is the establishment of a wellbeing feedback loop. 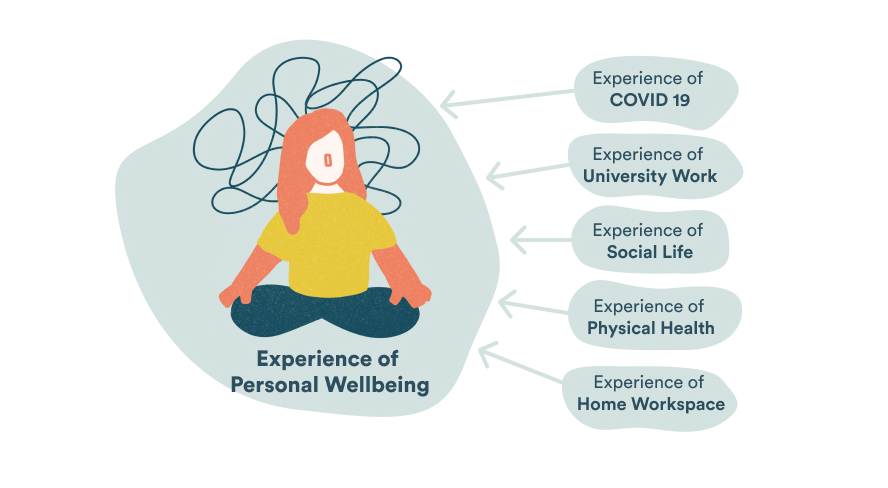 The idea of a wellbeing feedback loop finds its roots in cybernetics. More information on the concept, history, and theory of cybernetics can be found in the appendix. In essence, cybernetics is a transdisciplinary approach of understanding systematic processes in biology, social systems, engineering, design, learning, and the list goes on. Every cybernetic system exists out of five essential parts: a goal, the comparator, actuator, sensor, and the environment. An easy example of a cybernetic system is a thermostat. Let's say that I find it chilly in my living room and I want it to be warmer. I might walk over to the thermostat and tell it that the temperature has torise to 21°C (goal). Because the thermometer(sensor) in the thermostat(comparator) tells the system that it's 19°C in the room, it notifies the central heating system(actuator) to activate and the room(environment) heats up. Then the cycle starts a new as the system measures whether the temperature aligns with the goal, if that's the case, it will tell the actuator to seize action until the temperature in the room drops below the desired temperature. This too is how we envision the integration of wellbeing at a university. By setting goals, namely multiple aspects of wellbeing, the can measure what that status of those aspects is (sensor), develop policyaccordingly (comparator), let the policy take action (actuator), this will presumably have an effect on the wellbeing of staff and students (environment) after which we can again measure to what extent the policy was indeed effective (sensor).

While every wellbeing feedback loop is embedded in a larger system (that in itself is a feedback loop) it is subject to the "cold start problem.” This term stems from the field of Artificial Intelligence and refers to the fact that when an algorithm starts to optimize for a goal, it faces a large degree of uncertainty. For example, the first time you create an account on YouTube, the system is trying to learn which videos to show you. In the beginning it will often times show videos that do not interest you because it has not gathered enough information yet. This is, to some extent also the case with the first iteration of the wellbeing feedback loop. Therefore we'll first explain five steps to complete the first iteration, after which parts of them will be repeated to maintain the loop in the following iterations.

Every loop starts by introducing a goal to the system. For example, if you take a feedback loop such as the temperature inyour living room, you might feel that it should be cooler and you introduce thegoal of 'lower temperature to your thermostat (the comparator). In our case, the goal was to establish a wellbeing feedback loop to inform institutional action to support the wellbeing of staffand students during the corona crisis of 2020-2021. In other words, we introduced the goal of 'wellbeing in times of corona'.

As mentioned briefly, the loop that is aimed to be established is embedded in alarger loop and an existing system thathas a research history. For this reason, it isrecommended to research existing metrics that align with your goals. In our case, we started by inventorizing self-report wellbeing assessment instruments. Among this list were common metrics like the SWLS, HILS, PERMA, QOL, etcetera.

Engage stakeholders to contextualize and optimize

Starting from the metrics that have been found, it is now the question of whether those are the right fit for the context. In other words, what do stakeholders and those most impacted think are the right questions to ask? This process can be done through a human-centered design process including interviews, co-design sessions, or simply hallway talks. In our case, the context had a strong impact on wellbeing at the time, namely the coronacrisis. So, early on in the process, we found that by talking to students, student deans, psychologists, policymakers, teachers, academic advisors, etcetera, that there are topics that we should be asking about that were not in the questionnaires we had gathered. Additionally, it became clear that not all of the questions that were in the questionnaires were relevant. This process lead to the first version of the measurement instrument, that for example in the case of the student variant, was a set of 26 items including existing scales, such as Satisfaction With Life, checkbox items derived from existing research as well as items gathered through the design process like "I am satisfied with my study / life balance" and "I have a dedicated desk for studying."

Then, like any survey, it should be sent out.

After measuring it the case to translate findings into actions. This can bed one at several levels. For example, a report can be written about the findings and distributed among policy-makers and other wellbeing stakeholders alike. This will most likely result in top-down initiatives. Another option is to engage wellbeing stakeholders in the analysis process which is what we did in our case. To analyze the qualitative data, we've setup a community-led Wellbeing Design Workshop where eachparticipant (n = 44) analyzed a portion of the thousands of written responses. Then during the workshop, participants were divided into groups and assigned a certain topic (e.g. physical health or socialinteraction). The most notable from this approach was that at the end people were activated to take action in their own circles, in other words, it led to more bottom-up activity.

one iteration has been completed, the loop is back at the stage of the comparator' in our case University Governance.' Thus, to maintain the loop, it is now a question of whether the goals need revision. Just like the temperature in a room, it is now the question of whether its the right temperature or whether you've set it too high. If the temperature is too high after all, perhaps you want to adjust the thermostat to a cooler temperature. In this sense, after the first iteration, it might become apparent that your initial view of wellbeing was largely focussed on social wellbeing, while physical wellbeing appeared to be strongly indicative of overall wellbeing. Hence, the goal might be adjusted to accompany more metrics of physicalwellbeing.

Do metrics need an update?

If the pervious is the case, one mightreturn to previous research and select metrics of physical wellbeing. Additionally, it is essential that another co-design roundtakes place engaging wellbeing stakeholders to identify whether thecurrent setup is asking the right questions. Henceforth, update accordingly.

Now the second moment of assessment can take place

Again, repeat the steps as in the first iteration. Pick the approach that best fits the goals and has proven to be successful in the previous iteration.

Repeat this process indefinitely to establish a wellbeing feedback loop that becomes more sensitive overtime to both the core values of your organization as well as external influences on the system.